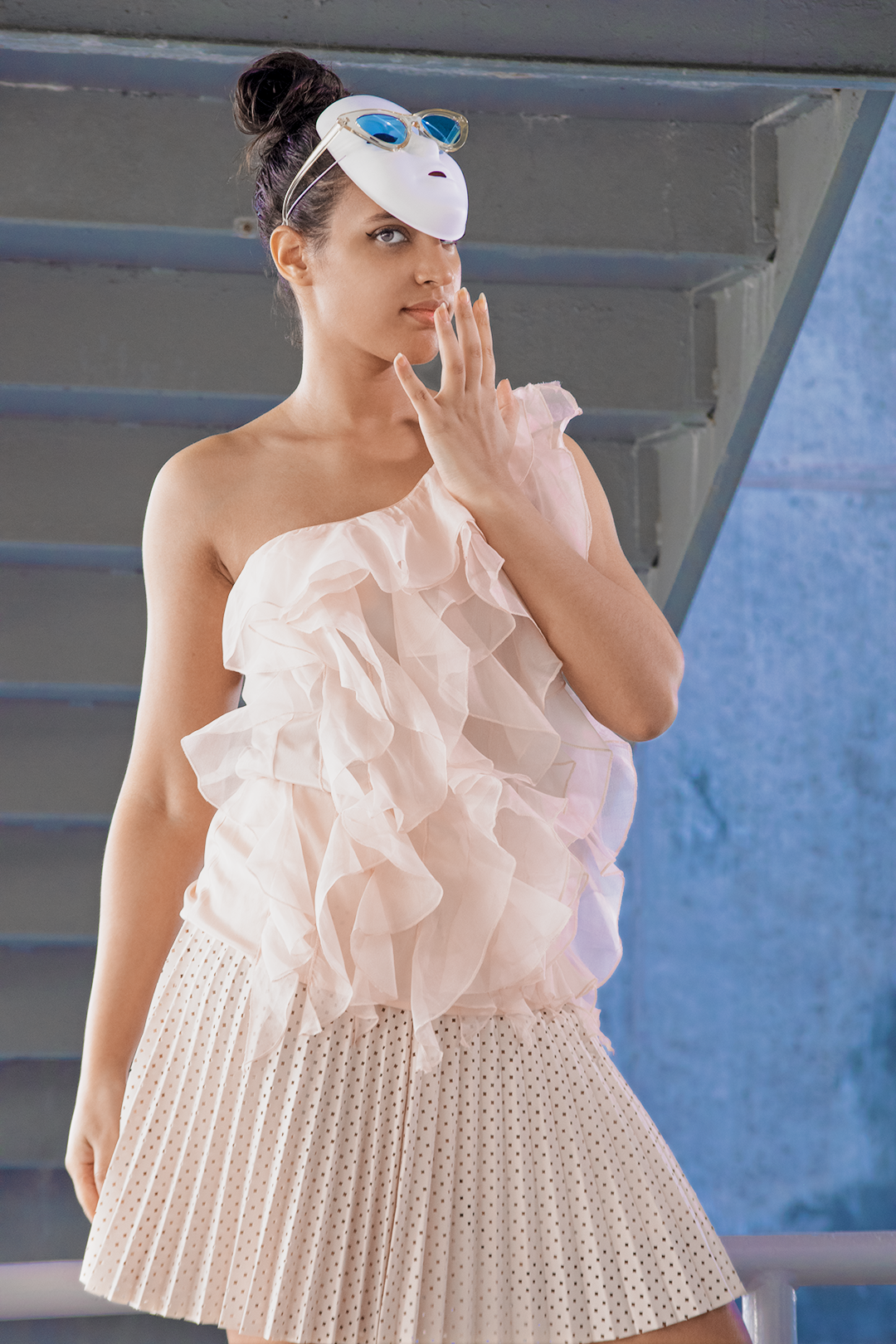 To see all the fashion associated with this editorial, check out our look book below.

Part 3 of the identity discussion pairs masks with fashion to symbolize the way many hide their true identities in plain sight. We have been discussing identity expression through fashion from a cultural perspective, but identity is a broad topic. There are many ways to express identity and many forms of identity measurement. Though some consider the Myers-Briggs Type Indicator outdated, it is widely used in business and can offer a broad enough traits-focused model to use as a marketing persona. As a proud INTJ female, I’m excited to explore some hidden and less talked about aspects of the INTJ female with this editorial.

If you’ve been a long-time reader of the blog, you may be familiar with several our INTJ archetypes from our Loving the INTJ series. Quirky, guarded, independent, and paradoxical were first used on our blog to discuss different aspects of the INTJ female in terms of romantic relationships. We expanded upon these traits in our “The Elusive Fashion Habits of the INTJ Female” e-book (which is itself an expansion on an older article). In the book, we used these traits, or aspects, to explore the behavioral framework for how female INTJs think about and interact with fashion. While we called these fashion-oriented traits fashion moods, ultimately, the moods are often discussed as INTJ traits. INTJ females are guarded, independent, a little quirky, and quite paradoxical; but INTJs are also prepared utilitarians, guarded idealists, have louder minds than what we let on, and are often secret creatives. These are the hidden sides of the INTJ that are rarely mentioned, likely because INTJs prefer to hide their softer sides. Often, only those close to us know about these hidden traits, yet they factor strongly into the INTJ identity.

An INTJ’s tendency to practicality may get them labeled as over prepared, or even mom friend; however, the INTJ’s practicality also means that they are prepared for a wide range of situations. In this way an INTJ may not be surprised by much, reacting quickly to changing environments and having quick fixes to problems.

This masked image fashion is more than a summer trend, it also reflects the INTJ’s love of utilitarian clothing. Pockets, big bags, and practical footwear are what’s needed and can be used to stow away anything that might be needed from umbrellas to Band-Aids and snacks.

You may have heard that INTJs are cynical idealists, but as much as we love to talk about an INTJ’s sarcasm, cutting wit, and dark sense of humor, it remains that INTJs are idealists. Just because that sense of idealism is somewhat cynical and guarded doesn’t negate the truth of it. What does INTJ idealism look like? Well, INTJs just may have a tendency to secretly believe in soul-mates, love the idea of Santa Claus (despite the logical impracticality of such a being), and some harbor the hope that their out-of-the-box ideas might be helpful to society. Without idealism, an INTJ’s imagination might be stifled.

While INTJs are notorious for loving to-the-soul black, peel back the inside layer of an INTJ’s own soul and you’ll find a softer hue, this duality leaves just enough room for a few of the softer things in life. Our pretty in soft pink and neutral tones styling might look sweet on the outside, but don’t be fooled by the cover. No matter what the outside dressing says, the INTJ female’s idealism, when paired with her intellect, can translate to a relentless drive.

INTJs come across as quiet and mysterious, yet our minds are anything but. INTJs are constantly thinking, observing, planning, and dreaming. Maybe it is because of this loudness of mind that we don’t talk as often as other girls, but don’t let the quiet demeanor fool you. INTJ females are no pushovers. The loudness of mind may come close to a cacophony of sound at times, but we know what we think. As part of the INTJ female journey to maturity, we have learned to listen to our own thoughts, to reflect on personal truths, to plan from an inner perspective, and finally to trust the intersecting logic of the INTJ female mind.

This style’s loud patterns and colors capture the deep inner world of an INTJ’s thoughts. When the INTJ female is at her most quiet may just be when her mind is the loudest. Whether she has gone in search of the endless rabbit holes of information, or is reflecting on some deep and mysterious truth, exploring the phenomena that is loudness to the INTJ will yield a bounty of deep and insightful conversations.

One of the more popular articles on the Always Uttori blog is called INTJ: The Secret Artist. It’s true. INTJs have a secret passion for art. “Art” can take many forms from music, dance, fashion, paintings, or even something as esoteric as data. For the INTJ female, that interest may be expressed through participation, collection, or simple appreciation. Creative expression inspires INTJs and helps them to explore the world outside their own mind and to open the door to more sensory experiences.

Hidden INTJ traits are rarely discussed in the MBTI world, but they are important facets of the INTJ personality. They add nuance and character to common personality tropes, which is why it’s important to explore. It’s best to keep in mind that identity is, in itself, a broad topic that spans many schools of thought. In its simplest form, and what I want to communicate in this post, is the following: identity is the amalgamation of the many traits, perspectives, behaviors, etc., that gives us a sense of individuality. While we may identify as one thing or another, there is no single trait that can ever define personhood. We must look beyond the obvious, easy, and stereotypical to truly know someone. As individuals, we must be careful to not take the identity for which we may have an affinity for at face value. Any identity to which we connect requires from us a willingness to also explore and evaluate the accompanying traits for both value and meaning before we ever truly make it a part of who we claim to be.