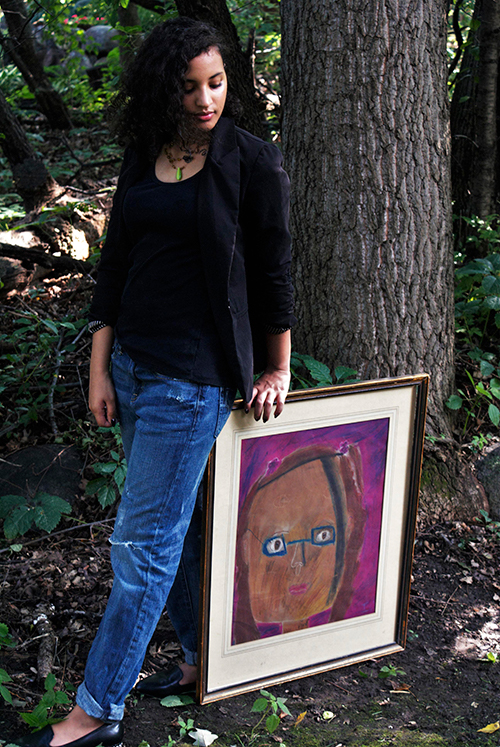 Thursdays are usually fashion days on Always Uttori, but today’s post isn’t  about fashion, instead, it’s about the dichotomy of being an INTJ rational who is also a creative. Psychologist and pioneer in the study of creativity, Frank Barron, put it this way: “The creative person is both more primitive and more cultivated, more destructive, a lot madder and a lot saner, than the average person.” From my perspective, this quote truly resonates. INTJs are unique in that our thinking patterns give equal weight to both the rational and the creative, but far too often, we only respect our rational natures. Merging the two sides together can be  difficult. There are times that creativity and rationality blend together wonderfully, but INTJs often feel that they should be focused on the weighty problems of the world. They are problem-solvers and the problems that can be found in art and design don’t seem . . . well, serious enough (though Steve Jobs might beg to differ).

INTJs tend to pursue careers heavy with the scent of respectability. We are doctors, lawyers, scientists, physicists . . . heck, some of us would rather justify being lint cataloguers over being artists.  INTJs tend to be artists on the low. We go to art fairs, or collect photography books. We are supporters of the arts, but rarely the artist. Supporting other artists scratches the creative itch, I suppose. Yet, in my life, I needed more of an outlet for self-expression. I’ve found that blogging has given me a way to feed both my rational side and my creative side, as both are required to create and order content into a hopefully coherent form of communication. Still, the blog is a gamble. It doesn’t provide any income, and it is just the first step in what I hope to be a fully realized venture (which is why I’ve returned to school, so that I can learn how grow Always Uttori into what I do have envisioned). Even so, going back to school has been jarring. I knew on some level that it would be, but, of all the difficulties that I expected to encounter, I never thought one of them would be the pesky INTJ paradox of the creative rational.

Please don’t misunderstand. I’m not saying that creatives aren’t rational, but most creatives are not beset by a constant monitoring of the logic of a choice. “Just do it!” said no rational ever. We’re the ones who come up with plans, backup plans, and tertiary plans. We weigh the cost of every choice. We second-guess our second-guesses. I did the same before going to art school. I weighed the risks, assessed the hoped-for rewards. I chose art and passion over law and tepidity (because I also applied to law school).  What I’ve found most challenging is that, despite my long history and fascination with art, I never considered myself an artist. I’ve been drawing since forever (the picture I’m holding in the photo is a self-portrait I drew of myself during a summer arts program at the Minneapolis College of Art and Design when I was 10). During junior high, I was an arts intern. In high school, I was a member of the National Arts Honor’s Society. I also co-founded a writers group for teens at the Loft Literary Center in Minneapolis, and interned for another arts organization, Intermedia Arts, while in college. Yet, I never saw myself as an artist because it wasn’t a practical career choice. After all, no one gets jobs in the arts. Even as I write these words, I find myself a bit surprised at the number of artistic endeavors in which I have engaged. Especially as, when it was time to go to college, I never once considered studying art. Instead, I applied to an international business program because it was the most practical degree in which I had an interest. Somehow, I ended up in the social sciences, doing Global Studies, and I truly loved it. Social Sciences, it turns out, are a perfect merger of creativity and rationality. After college, I worked as a data/business analyst, and while I appreciated the respectability, a part of me was desperately bored, not by the data analysis process, but by the mundaneness of the data.

What I’m trying to say is that I have experienced both sides of the driving force of the INTJ thought structure, but rarely together. As a young student my world was centered in the imaginative, purely creative NI. As a young, working adult, my focus was almost entirely on logic-driven, rational Te pursuits. Now, in this new phase of life, my goal is to find a happy medium for both sides of my INTJ brain, for the creativity and the rationality. This is probably one of the biggest challenges all INTJs face. It’s just that for us, art and creativity seem to be a dirty, little secret. We don’t talk about the importance of feeding that side of our brain; yet, I’ve met so many INTJs who produce great art, whether it be fashion, photography, drawing, painting, writing, or music.

INTJs are more than just rational robots. As a community of like-minded thinkers, we see the world in a rare and unique way. Expressing our viewpoints through artistic pursuits shouldn’t be shameful. It shouldn’t be on the low low. Art and design are serious enough for even the most rational of minds to pursue. The last several weeks have been some of the most challenging of my life. Art requires order and logic and a rationale, if not rationality, so don’t forget your creative side, let it shine even if your other half tells you not to bother with it. As for me, I’m that little girl in the portrait, and I owe it to her to work as hard on the creativity she so enjoyed, as I do on building my INTJ mastermind.