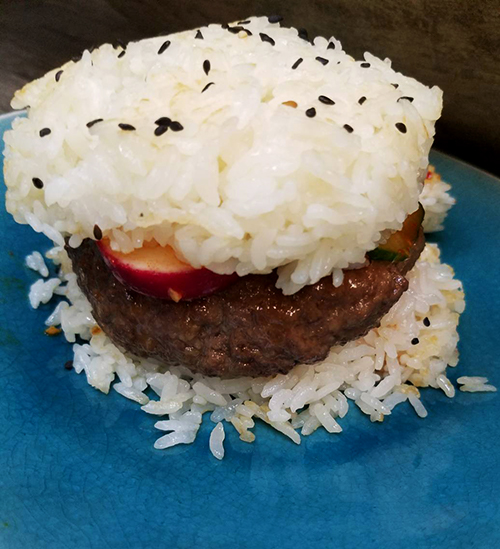 Americans love a good beef burger, but these days, burgers are a lot more diverse than just a beef patty on a bun. From chicken to black beans, there’s a burger to suit every taste. The most recent burger craze is one that features sushi. The sushi burger seems to be all over the internet. It can also be found on food trucks across the nation. Instead of rolling fish and rice up in roasted seaweed, the fish is sandwiched between two rice “buns” making it look like a burger, or even burrito in some cases. As a sushi lover, and in search of a global food recipe for the blog, I considered creating my own version of a sushi burger, but sushi is tricky. I don’t quite trust myself to prepare raw fish for consumption, especially not with parasitic infections on the rise. All in all, it’s probably better to leave sushi prep to experts. So, in considering a few of my other favorite Asian style dishes, it dawned on me that kimbap would make a perfect burger. If you’ve never heard of kimbap, it looks a lot like sushi. The Korean rolled rice snack is perfect for those who don’t fancy handling raw fish, as kimbap features cooked beef. Surprisingly, a quick Google search didn’t yield any recipes for kimbap burgers, which was surprising as it seems like a no brainer!

This recipe does depart from traditional kimbap in many ways (like being a burger), but has the main flavors from a bulgogi (marinated meat) kimbap. In the end, I was more than happy with the results, and the family loved it. If you want to add a bit of global flare to an end-of-summer cookout, try this recipe.

1 bunch of radishes or half a daikon radish

Start by preparing your rice. Rinse the rice until the water runs clear. Follow the cooking instructions for your rice to make sure you get the proper water to rice ratios and cooking times. Let cook while preparing the rest of the components.

In a large metal bowl, combine the ingredients for the bulgogi marinade: soy sauce, brown sugar, mirin, etc. Add ground beef and mix with your hands until well combined. Let sit while you make the pickles.

Slice the radish and cucumber horizontally so that they look like traditional hamburger pickles. In a medium bowl, mix the salt, chili, ginger, garlic, and soy sauce. Add the sliced vegetables and stir to combine. Let sit for about 10 minutes, then add the water. Since this is a quick pickle we need to let the ingredients sit on the vegetables for a bit so that it can more quickly flavor the vegetables, before diluting with water. If there are any pickles left after you make the burgers, you can store in a jar in your fridge for 1 month. Let the pickles sit until the burger is ready to assemble.

Once the rice is cooked, mix the rice vinegar, salt, and sugar in a small bowl. Microwave for 30 seconds then stir until the sugar dissolves. Spoon rice into a large bowl. Add the rice marinade and mix into the rice. Heat a skillet on medium heat and spray with cooking spray. Spray the inside of an egg ring, or oil your hands so that rice won’t stick to your hands when forming the bun shape. If using an egg ring, you can place it in the skillet, and press the rice down with the back of a buttered spatula. Then simply press gently on the rice and it will pop out from the form. Lightly fry on both sides until it turns a light golden brown. Sprinkle sesame seeds on top. If using hands, gently shape into a circular shape. Do the same for the rest of the buns.

Once all the buns have been toasted, place on a plate for later use. With your hands, form the marinated meat into small hamburger patties a bit smaller than the size of the rice buns. Place in the same skillet used for the rice buns and cook, flipping occasionally, until the sauce begins to caramelize on both sides, about 15 minutes. Place burgers on top of rice bun, add the kimchi pickles, and top with another rice bun.