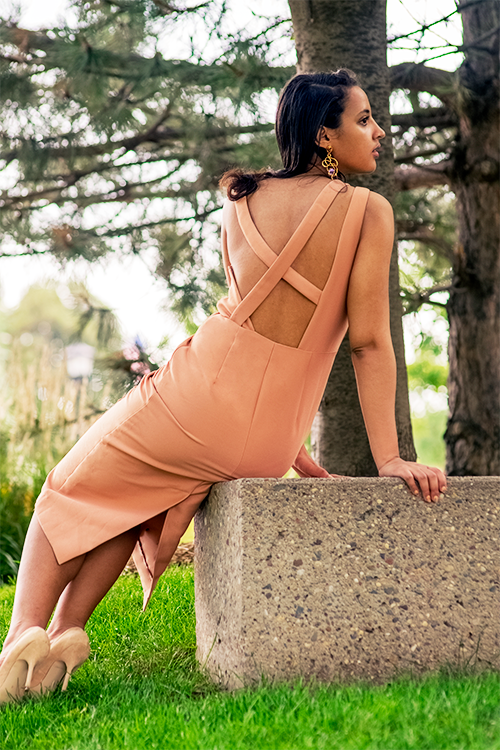 The month of love is upon us and those tricky relationship questions that we all have are especially top-of-mind. Last year, we identified several INTJ female qualities that make dating INTJ females a unique, and maybe even a little confounding, experience to the uninitiated. The articles have been some of our most popular articles to date, (no pun intended). We thought we would dig a little deeper this year and answer the question of why INTJ females are independent, guarded, paradoxical, and committed. We will also share both anti-romance and romantic fashion looks for each of the INTJ attributes we focus on.

Now that we know what makes INTJs independent thinkers, how did they become this way? Knowing this will help to understand how INTJ female independence plays out as part of the relationship dynamic.

Remember uchi-soto? Uchi-soto is a Japanese term that we appropriated for our mastermind series. In Japan, the term is used to refer to a person who is both a part of a group and apart from a group. In this “wisdom-of-the-crowd” American culture,  the INTJ female’s independent way of thinking can create the feeling of being an outsider. I can’t speak to the specific type of rejection experienced by every INTJ woman, but social rejection is a common theme for our cognition style. After repeatedly being rejected for thinking differently, the INTJ female must either hate herself or ask herself why a seeming majority of others operate from a herd mentality. This is how questioning and verifying facts and rationales becomes an INTJ habit. If she is lucky, the INTJ will have the support of her family and will find friends who accept that not everyone shares the same cognition style. If she is very lucky, her independent cognition style will be encouraged. Cognition-style is not a choice. It is simply the way we process the information in our environment. While American culture has become more open, and the “norms” of what constitutes female cognition have broadened, many INTJ females still face a sense of isolation. This becomes an integral part of the INTJ’s personality. She learns that self-reliance and independence are key to her survival.  In that way, being independent is more of a defense mechanism. It’s been honed over the years to the point of becoming a type of armor. The INTJ female is independent, self-sufficient, and doesn’t like to rely on anyone else (this also plays into why the INTJ female is guarded, but we will get into that later). As with any armor, the INTJ independent mentality is a way of protecting the INTJ’s vulnerable heart. The truth is that INTJ females also yearn for the same things that other women want. They, too, want love. They want understanding and acceptance. They want a time when the search for love is over and they can take off the heavy protective armor and relax. They want to be able to rely on someone other than themselves. Unfortunately for many INTJ females, if they do take that risk of opening up and it ends in disappointment, they can find themselves strengthening the armor so much that eventually they find that they can’t let anyone in.

Can you be too independent? Yes. Of course. Even so, wear your independence as a badge of honor. That independence is hard-won. It shows the strength of character that it takes to remain true to yourself and not conform to others’ ideas of perfection. The independent path is not an easy one to walk. INTJ women know this. It can be lonely when you don’t have someone to share a mental connection with; nevertheless, the road “less traveled by” (apologies to Robert Frost), can also carry us on a truer path, one that will be traveled by others who also travel a less worn path. In other words, when we are true to ourselves, we have more hope that the people we make connections with will be the right ones. And that will make all the difference in the journey.

Independent but not Unconnected

While independent, INTJs do want to make genuine connections. For the INTJ female, taking the independent path is rarely made at a conscious level. When the right person comes along, the once independent INTJ is happy to partner up, compromise, and work together. After all, going it alone is hard and exhausting. A real partnership seems like an ideal dream to achieve, but beneath all the armor, INTJ females do have a romantic, if practical, heart.

Finding the right connections is hard work. Truth to tell, the search can seem disheartening at times. But every relationship that connects us on a mental, emotional, and spiritual level is to be cherished, whether it is romantic, friendship, or family, something INTJS know well. Once these connections are made, INTJs don’t take them for granted.

As for our fashions, I love that – with half of Americans celebrating Valentine’s Day as singles – it’s no longer solely about focusing on a significant other. These days singles are celebrating their independence with galentine’s parties, treat yo’self celebrations, and many other self-affirming activities. And let’s just be honest, while it’s nice to dress up on occasion, dressing up for a guy can be a bit of a hassle. If you’re all-the-way fly and fancy-free, the fierce look is about suiting yourself. Is it too much of a stretch to say the green and brown colors of this look were pre-planned to fit into the armor metaphor I’ve gone with here? Let’s pretend that it was. This over-sized military style jacket paired with a form-fitting dress tells the world you’re just fine living the single ladies life. And those nasty boys can address you as Miss Independent, thank you very much.

As for our date night look, the star of the show is the back. Crisscrossing lines on the neckline of this dress make for a subtly romantic look if you’ve got a date this Valentine’s day. Looking for metaphors for your love fashion?  Let’s just say the lines represent our connections in life. Yeah, it’s cheesy, but I’ve been sniffing too much chocolate. Wait. Did I just mix my metaphors?

Interested in loving your independent INTJ better, check out last year’s article where we discuss how to love the independent girl.