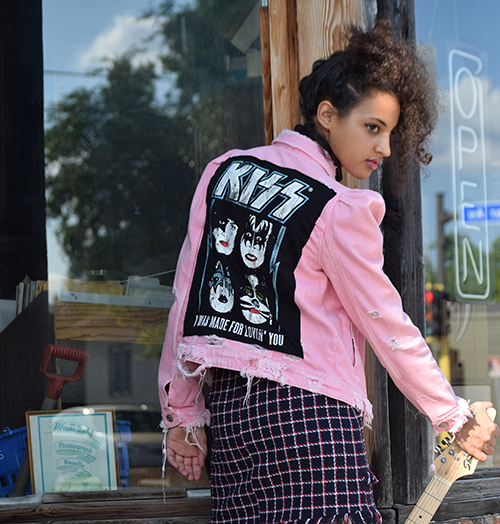 Slay The Books Looks Back to School Fashion 2017 Look 2

It’s Monday, and we are back at it with our Slay The Books Looks Back to School Fashion 2017 Look 2. As I mentioned on last Thursday’s post, this month, we will be juxtaposing common student archetypes on Mondays with their grown-up potential on Thursdays. So, today’s fashion archetype is the band geek. What does the band geek grow up to be if they continue in music? A music mogul, which will be our Thursday look.

As we often talk about on the blog, people are more complicated than the archetypes, or stereotypes, we place on them, whether that stereotype be band geek, cheerleader, jock, or INTJ. Many archetypes are not really characterizations, instead, they’re actually affinity groups. The difference between archetype and affinity is slim but important. Archetype is defined as “a very typical example of a certain person or thing,” while affinity group is “a group of people linked by a common interest or purpose.” When you use archetypes like band geek to form conclusions, you are basing those conclusions on the “best line” or linear regression of data points, an average of all, in which assumed characteristics of individual group members are used as data points. This can lead to erroneous conclusions because there is no clearly defined contextual basis other than the affinity category. From that perspective, it is clear that not all band geeks are alike (I use the term geek in the modern sense to mean an enthusiast or expert). Shifting the context from a stereotypical label like band geek to affinity group means that, instead of conclusions based on a single data point, say an interest in music, we get a broader understanding of individual group members, including that they have a shared affinity.

I said all that to say this, the band geek isn’t one size fits all. Not every band geek will be a Kiss aficionado, or even appreciate the electric guitar. What about the percussion, horn, and wind instruments? Even within a band, there are affinity groups. While this blog runs on the idea of functional fashion for INTJs, I never forget that the INTJ mindset describes an affinity group, and while we may share cognition tendencies, INTJ values, esthetic, and characteristics are not set in stone.

As for the outfit, this is an ode to my dad who, growing up, loved the band Kiss. Jean jackets are very on trend, especially with any kind of patch work or “custom” details. The tweed skirt elevated the look, while simultaneously making it appear more punk rock because it’s an unexpected combo of refined and distressed. And finally, the velvet boots are a great way to get in on the velvet trend that doesn’t seem to be going anywhere anytime soon.

back to school Fall Fashion 2017