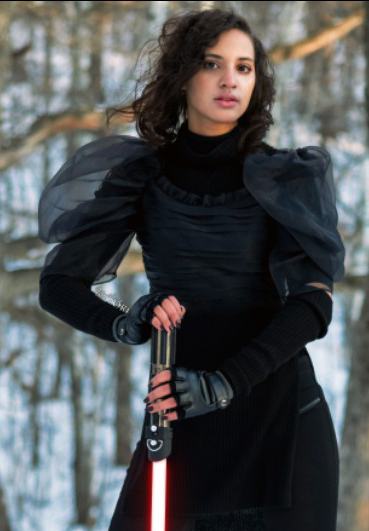 Happy Spooky Monday! Halloween is just a week (and one day) away, and sadly, that means today’s look is our last Always Uttori Subtleween 2017, Star Wars: The Force Awakens bad guy look. If you’re feeling Subtleween withdrawal already, don’t forget to check out our take on the other Star Wars baddies: Bazine Netal, Captain Phasma, and General Hux. Even though it’s the end of subtleween, there isn’t a better character to finish with than the terrifying, dramatic, and conflicted, Kylo Ren, Master of the Knights of Ren.

Kylo Ren isn’t the one-sided villain we typically see in good versus evil stories. He is just as vulnerable as he is terrifying. It’s rare that we see a villain’s struggles, as we do Kylo’s, but this glimpse into the inner workings of his mind makes him not only a unique villain in popular media, but also a more realistic one (minus the whole super power force thing, mind you).

As for our take on Kylo Ren, it’s not so subtle, but Kylo Ren isn’t the subtle type. Whether our looks borders more on full costume, or even cosplay, one thing is true, INTJs love fantasy. It might be surprising to find that many INTJs love cosplay. Even though INTJs are seen as rational, they are also creative. Halloween is the perfect time to use that creativity. Here, at Always Uttori, we call that dressing for introverted intuition. Introverted intuition is the engine of our possibility thinking, so from that perspective, for INTJs who are makers, creators, problem solvers, intuition is often expressed in the love of the fantastical. When INTJs bring this fantastical thinking of the introverted intuition into the real world (manifested intuition) they tend to pick realms of interest.

If you couldn’t tell by our Subtleween focus this year, I am a Star Wars Geek. It was passed down to me from my father, also a Star Wars geek — though not his father before him. My brother, though . . . he wore a blonde pig-tail in his afro until the age of 20. I jest, but the statement isn’t too far from the truth. I have him to thank for lighting my inner dark side for these photos, without his help in editing, we couldn’t have achieved the kyber red on Darth Vader’s lightsaber. Thanks, bro!

I hope everyone has a fun and safe Halloween, whether you celebrate it subtly or unsubtly.