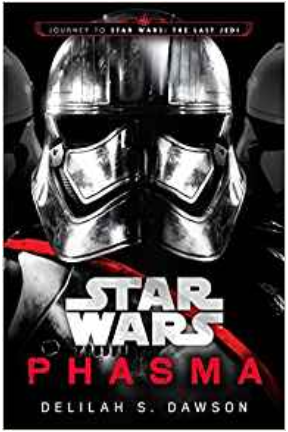 Happy Tuesday, my bookish friends. Although we share a reading list each month, it has been some time since I’ve done a full book review. In the spirit of our Subtleween celebration, and Monday’s highlight of the character Phasma from Star Wars, I couldn’t resist talking about the eponymously titled book by Delilah S. Dawson.

Released on September 1st, 2017, as part of the Journey to Star Wars: The Last Jedi marketing campaign, Phasma reveals Captain Phasma’s history, and sheds light on her as a character. As the publisher’s summary says:

One of the most cunning and merciless officers of the First Order, Captain Phasma commands the favor of her superiors, the respect of her peers, and the terror of her enemies. But for all her renown, Phasma remains as virtually unknown as the impassive expression on her gleaming chrome helmet. Now, an adversary is bent on unearthing her mysterious origins — and exposing a secret she guards as zealously and ruthlessly as she serves her masters.

Deep inside the Battlecruiser Absolution, a captured Resistance spy endures brutal interrogation at the hands of a crimson-armored stormtrooper — Cardinal. But the information he desires has nothing to do with the Resistance or its covert operations against the First Order.

What the mysterious stormtrooper wants is Phasma’s past — and with it whatever long-buried scandal, treachery, or private demons he can wield against the hated rival who threatens his own power and privilege in the ranks of the First Order. His prisoner has what Cardinal so desperately seeks, but she won’t surrender it easily. As she wages a painstaking war of wills with her captor, bargaining for her life in exchange for every precious revelation, the spellbinding chronicle of the inscrutable Phasma unfolds. But this knowledge may prove more than just dangerous once Cardinal possesses it — and once his adversary unleashes the full measure of her fury.

Listen to a preview of the book here.

As a fan of the now non-canon Legend stories, I’ve been disappointed in the recent canon books to come out. Phasma, while not perfect, is the first Star Wars book to feel more like something from The Fate of the Jedi, or even The Old Republic, series that made the Star Wars book series so popular. Overall, I enjoyed the insight it provides to Phasma’s character, as well as the First Order. For me, much of my interest in the Star Wars universe lies in the behind the scenes political structures and power struggles (working that introverted intuition love of world building), which are a major component in this book.

If I had any critiques, it would be that the story is told in present tense, as are most of the new Star Wars books. Further, the story is told, not by Phasma, but second-hand, no, wait, third-hand, by Vi, a resistance spy, who heard the story from Siv, someone Phasma knew growing up… What the what???? Now that Phasma is famous, everybody wants to claim that they know her? Anyway, with so much distance from Phasma’s own point of view, it’s hard to know what’s true and what’s not true. And that’s the truth. I suppose, to be generous, and for those who love an unreliable narrator, it also adds to the mystery of Phasma, if you like your mystery third-hand. While it can be frustrating to not be in Phasma’s head, Dawson, manages to use her unreliable narrators brilliantly, keeping Captain Phasma as the enigma she is meant to be. Perhaps because we fear the unknown, a lack of intimacy with Phasma’s perspective makes her far more fearsome than she would be if we knew what she really thought.

While I enjoyed the plot, and learning more about the bad guys, what I found most refreshing, was to read a book whose character is very obviously a “T” or thinker, to use Myers-Briggs terminology. Based on the book, I would type Phasma as an ESTP, and while her cognition style is very different from INTJ female cognition, we rarely see depictions of strong rational women in media. Unfortunately, characters who are “T’s” are often portrayed as villainous. We haven’t strayed from the trope here; however, we rarely get to experience these types of females as the main character.

What about the other cognition styles in the book? Because Phasma’s story is filtered through the perspectives of strong feeling types, Siv, and then later, Vi, the portrayal of Phasma is “other”. She is alienated, or different, from most people. Vi gives hints of Phasma’s humanity, but, because she doesn’t understand Phasma’s motivations, Phasma comes across as someone who has a skewed rationality. There is no distinction between rational behavior and amoral behavior. Let’s be clear, Phasma is morally evil; nevertheless, despite her unyielding stance, she does take responsibility for her actions. It is one of the redeeming qualities of her character. Yet, while her choices are evil, the motivations behind her choices aren’t necessarily wrong. In other words, the same motivations could have driven her to make moral, life affirming choices. Just because she does not make ethical choices, does not mean that she lacks rationality. Highlighting this dynamic by contrasting her behavior with that of someone who is also a “T”, but an ethical one, may have served to enhance Phasma’s fear factor even more. As a fellow rational female type, Phasma’s decisions seemed efficient, and tailored to capitalize on an opportunity in the best way possible. Another thing I appreciated is that while Phamsa is portrayed as cold and uncaring, as are many female “T” types, Dawson, also made sure to include a couple of small moments that hint at emotions behind Phasma’s cold exterior. That is the brilliance of filtering Phasma’s story through other characters. Dawson gives us the space to interpret those moments as we wish.

While I would have liked to experience the mind of a “T” female character more broadly than the epilogue, I also appreciate the somewhat unique story telling method employed in this book.

If you haven’t read it already, and you are looking for a “spooky”, or bad guy-centric, read this Halloween, I would recommend Phasma by Delilah S. Dawson.