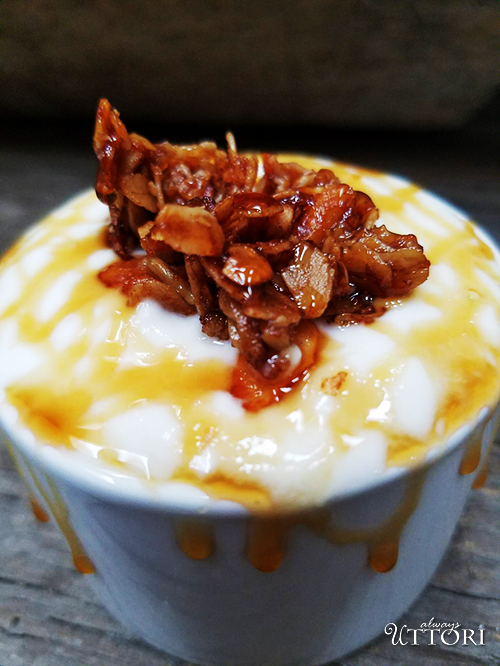 Yogurt (yoghurt) is an ancient food that has been a part of the human diet for hundreds of years. Once called the food of the gods, yogurt is believed to have originated in Mesopotamia, when nomads, who stored milk in animal skins, found that the milk that they had stored for later refreshment had fermented, thus producing yogurt. Modern-day yogurt is far removed from that first incarnation of fermented delight, and most would argue that much of what you find on grocery store shelves is a far cry from the healthful, full-bodied version of yogurt that you can find in other countries. In fact, when I think of yogurt, I don’t usually think of it as food of the gods. It’s usually a sort of lackluster breakfast food that I get when sausage or pancakes seem too heavy. That changed when, last summer, I had an amazing yogurt parfait from Savannah Coffee Roasters in Savannah, GA. To be honest, I wasn’t expecting much when I ordered the fresh fruit bowl with the option of adding honey, homemade granola, and Greek yogurt. Savannah Coffee Roasters claim to fame is that it is a coffee shop that offers freshly roasted coffee, but even though they go the extra mile for their coffee, I wasn’t expecting the food, a limited menu of bakery items as well as the yogurt, to be all that great. Therefore, I was beyond surprised when a large pot of yogurt topped with fresh fruit, homemade granola,  local Savannah honey, and possessed of the appearance of food you could offer up to the gods, was placed before me. I wasn’t just surprised, however, I was tantalized and very happy to dig in.  Talk about delicious. I would have to say that it was the best yogurt parfait I’ve ever had, and there have been many mornings where I’ve longed for just a taste of that rich, complex flavor that was part of the flavor of the yogurt itself. I couldn’t resist. I had to try to recreate the dish myself. So, this is my attempt at a recipe for the Almost Savannah Coffee Roasters Honey Granola Yogurt Parfait

As summer winds its way to an end, I can think of no better last-minute summer treat than a cool, refreshing yogurt parfait, so here is my attempt at a recreation.

This recipe is not for the time-pressed. It requires lots of steps, and some of those steps, such as making the yogurt, require a fermentation period. Making yogurt is actually pretty easy. I’ve been making my own (on and off) for a few years, though I admit that it’s sometimes just easier to buy it; but if you have 30 minutes prep time and about 12 hours fermentation time, you, too, can enjoy fresh, homemade yogurt. Paired with homemade granola, and a generous drizzle of honey, there isn’t a better start to the day.

In a heavy saucepan, heat milk until it reaches 180-degrees Fahrenheit on a candy thermometer. Remove from heat and let cool to  a temperature of 110-degrees.

After the yogurt has thickened, let it chill in the fridge until cold. To thicken even more, place a cheesecloth over a Pyrex bowl. Put the yogurt in a cheesecloth, place in the refrigerator, and allow the whey to drain to your desired thickness.

This recipe is a calorie bomb, but it’s sooo tasty.

Preheat the oven to 350-degrees and line a baking sheet with parchment paper. In a large bowl mix all the dry ingredients. You may choose to finely or roughly chop the nuts. Add the 1/3 c of vegetable oil to the dry ingredients and mix well. In a small saucepan mix brown sugar and honey until the sugar has melted and the mixture has just begun to form bubbles around the edges. Stir in vanilla extract. Pour the sugar syrup over the oats and nut mixture and stir to coat well. Pour onto parchment paper and bake for about 20 minutes, or until the oats are golden brown, stirring a few times throughout . Let cool, and then break into large chunks. Store in an airtight container for up to 2 weeks.

Whew! Getting through all of the steps to make the yogurt parfait was time-consuming, but hopefully, you will find that all of the effort was well worth it.  It’s time to make your parfait, the easiest part of this whole process.

In a small bowl spoon the homemade (or store-bought) yogurt until the bowl is half full. Drizzle a little honey and add a spoonful of granola. Fill the rest of the bowl up with yogurt and top with more granola and a generous drizzle of honey. You can also add the fruit of your choice. Enjoy!