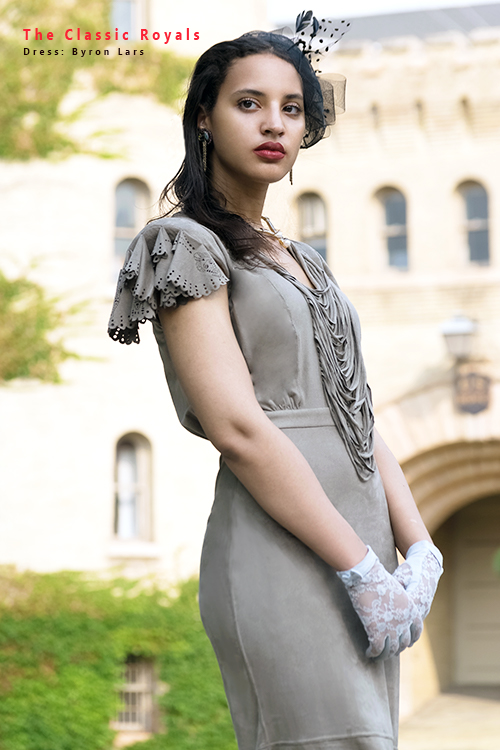 This Monday, we’re going classic princess style for our special November editorial inspired by the Netflix Original Series, The Crown. While last week’s look was a take on the modern-day princess, today’s look takes its inspiration from fashion history, and is more “classic” princess style. We call the look Lord Byron because it’s a Byron Lars dress; however, while Lord Byron influenced fashion in the 1700’s, our look is circa 1940’s.

The 40’s were a tumultuous decade for Elizabeth, who moves from girl, to woman, to wife during this period.

The Classic vs. Modern Day Princess

These days, we tend to think of princesses as pretty girls in frilly dresses, and maybe even damsels in need of rescue. That’s really not the case for real life princesses.  As stated earlier, Queen Elizabeth joined the Women’s Auxiliary Territorial Service during the height of World War II.To date she is the only female member of the British Royal family to have served in the military, and the only living head of state to have served in World War II. She has lived her life, not as someone who needs saving, but as the first to step up and volunteer when her country is in need.

Whether classic or modern, the role of princess requires intelligence, stamina, and social capability. As Queen Mary, Elizabeth II’s grandmother, is quoted as saying in The Crown, “While you mourn your father, you must also mourn someone else. Elizabeth Mountbatten. For she has now been replaced by another person, Elizabeth Regina. The two Elizabeths will frequently be in conflict with one another, but the Crown must win. Must always win.” Although the quote was created by the show’s writers to set up the conflict for the season, the sentiment is very true. Moreover, duty over personal desire is the distinction between a fairy tale princess and a real life one. Perhaps that’s why we gravitate to the idea of the fairy tale princess, choosing to push that as a cultural narrative over duty, service, and selflessness. Then again, maybe that’s why Disney Princesses go through so much turmoil BEFORE they can get their hands on a tiara, it’s a metaphor for life as a real royal.

Our classic princess is dressed in a style considered more formal in this day and age, but for the decade of the 1940’s, the style would be appropriate for many different functions, both for royals and non-royals. Moreover, the look is practical so as to not offend those on ration stamps. For the classic princess, the right attire is an art form. Elizabeth was quite the tomboy, but she was, and is, very good at presenting herself in a way that connects with her subjects. Queen Elizabeth II celebrated her Sapphire Jubilee (65 year reign) in February of this year. She is the longest reigning monarch in British history.