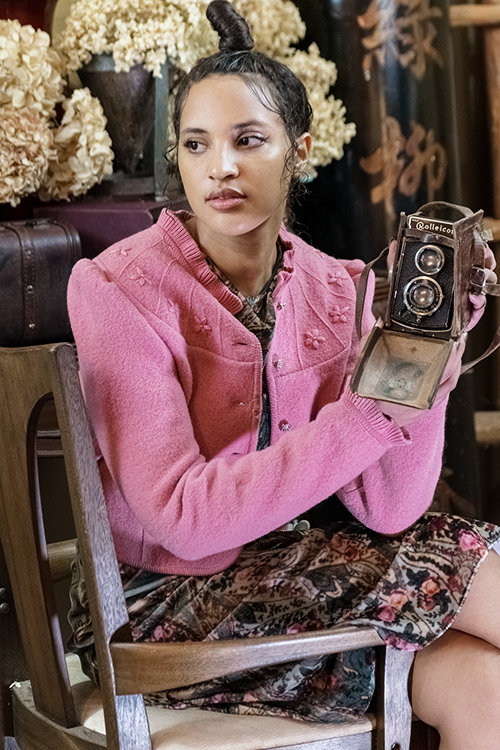 A Sense of Forever- Autumn Antique

A Sense of Forever – Autumn Antique

September is here, which means autumn is upon us. There is something magical about autumn. As the season changes and the environment transforms before us, the coming of fall has a beauty that can’t help but capture the imagination. This month’s editorial, Autumn Antique, was inspired by the rusticity often inherent in the autumn aesthetic.

Beyond the aesthetic, however, Autumn Antique aims to capture more than trendy fashion. The fashion in this editorial is largely “antique”, featuring thrifted items as a major component for each look. With the rise of fashion recommerce (or clothing resale, which includes thrifting and the secondary luxury market), many of the items hanging in our closets once belonged to someone else. In both a literal and theoretical sense these clothes take on a history all their own, one that is separate and distinct from the individuals who wear them.

What stories can these clothes tell? Who did they belong to before? What did they mean to the previous owner? What special memories are attached? Are there bad memories? What new memories will you create as you wear them? Will they pass on to someone new?

Fashion Designers have always promoted the idea of clothing as transient. We are to embrace them for the moment in which they were designed and then move on. For those articles of clothing that are distinguished as exceptional the trait of impermanence is exchanged for history. This idea is often explored in terms of fashion collecting. For example, costume fashion from movies or historical plays, or clothing worn by famous people often travel from museum to museum for people to gaze on and learn about as the history of dress. Many people also collect luxury items or hold on to pieces that mean something to them. However, as recommerce becomes more and more ubiquitous, and fashion less connected to time periods, even mundane and everyday clothing items take on new history and meaning.  It is a new age for clothing, one in which those who have an interest in being “fashionistas” can better afford to buy and wear styles in a disposable manner. Those pieces that are truly special, even items that are not overly expensive, can sell out due to limited production.  Fashion consumption can now be viewed as a four-part model: dress, obsess, observe, and/or collect.

In a non-traditional take on fashion obsession, Shirley van de Polder explores the human tendency to collect and obsess over fashion items. Using the writing of Adam Phillips as inspiration, van de Polder imagines Dress and Obsession as two characters conversing on the topic.

Dress has just been brought into a collection by Obsession. Dress doesn’t know its origin, who wore it, or the maker, and is overwhelmed by Obsession’s interest. Obsession observes the dress to analyze and make assumptions on its purpose. Perhaps the Dress was worn by an unmarried young lady for informal occasions. At the end of the analysis, Obsession is revealed to be a faceless nomad of the human psyche who lives in shadows and projects fantasies and desires on objects, which in turn grows the desire for the object. However, ownership doesn’t negate desire and the fantasy propels “obsession” to collect more. Obsession tells Dress that, for collectors, it is not just the factual and historical meaning behind the dress, but also the fantastical stories and the potential that inspire collectors, creating a sense of forever. Even though Dress’ origin is unknown, the unknown inspires the imagination, resulting in an aura of mystery, intrigue, and fascination. At the end of the article, the real dress is shown and revealed to be a part of the costume collection at Brighton Museum & Art Gallery in Brighton (UK).

Recommence is certainly furthering the sense that fashion is forever. It not only helps to create a circular economy, but it also prolongs the life and history of the clothes we wear. As old items are purchased, they are renewed, taking on new meanings and histories. The past is also kept alive and renewed, though, as Obsession says, it’s a bit of a double-edged sword that is never satisfied.

This lovely pink jacket was thrifted from a shop called Blacklist Vintage in Minneapolis, MN. Unfortunately, my first and only time in the store was on a whim.  After having brunch at a nearby restaurant, I wandered by and noticed that they were having a going out of business sale. I was able to get this wool jacket for only $7 as everything was heavily marked down. It’s paired with a vintage-style velvet dress from Zara.

Everything in this look is thrifted from Thredup, except the blazer and shoes which both came from ASOS. The super fun Naughty/Nice bag is by children’s accessories designer Bari Lynn. It has some slight damage. I purchased it from an Optiz Outlet, a Minnesota discount designer store. This was another find that I got on a whim when we saw the store and decided to pop in really quick after a photoshoot.

This dress was thrifted from Civvies, a popular thrift store in Savannah, GA.

This trench coat was also thrifted from Civvies. After bringing it home, I found a little brochure for the support of veteran families. So, I know a little about the previous owner, and it makes sense because Savannah has a large military base. The Skirt is J. Crew Factory and was featured in our very first year of blogging. The shirt is H&M. The hat came from Nasty Gal.