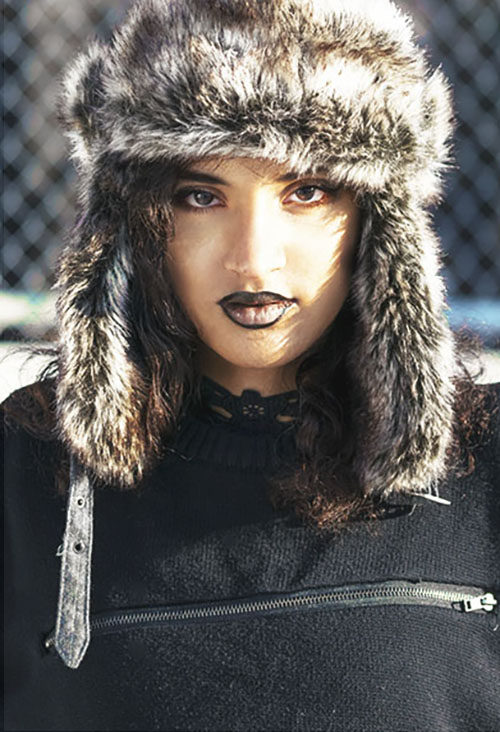 Fashion seems to want the advent of spring to be light, airy, and flowery. Heck, I’d like that too, but that’s a false spring. There’s a reason for the old Farmer’s Almanac saying: March roars in like a lion and goes out like a lamb.  The transition to spring, for which the first day was three days ago, March 20th 2017, is often turbulent, depending on where you live in the world. With this in mind, the twin look to Gothic Romance, Gothic Punk, makes perfect sense, especially in Minnesota, where the weather has gone from warm and balmy, to well-below zero, and then up to a temperate 30-degrees, and is, today, a stormy overcast 40-degrees. Needless to say that it has been up and down, fierce, roaring, unsettled, much like trying to style a Gothic Punk look.

We had trouble styling this one. I like punk, but it’s not something I wear frequently. To be fair, I could have gone with a more traditional style, but we were trying to reflect the look as an attitude, rather than a costume that measures punk by the number of studs on a jacket.

The original look started out with the leather pants and a skull shirt tied around my waist, but it seemed too pedestrian, a toned-down version of the costume that I was trying to avoid. The team and I went through a couple of iterations until we finally landed on this zipped sweater, another example of me going into the closets of other family members. The skirt, was originally scheduled for Victorian punk, but was cut for being too short. I might be a bit of a rebel, but I’m not a show girl.  Piece by piece, we tacked the look together, the lace top, featured in the twin look from Bella Gothica, the too-short Forever 21 skirt, leather pants from the Subtleween look for Black Widow, my beloved rain boots, and the zipper sweater snagged from my dad, who swiped it from my brother (Is family closet swiping genetic?).  The pièce de résistance, of course, is the ushanka hat, which gives the look a focus point.