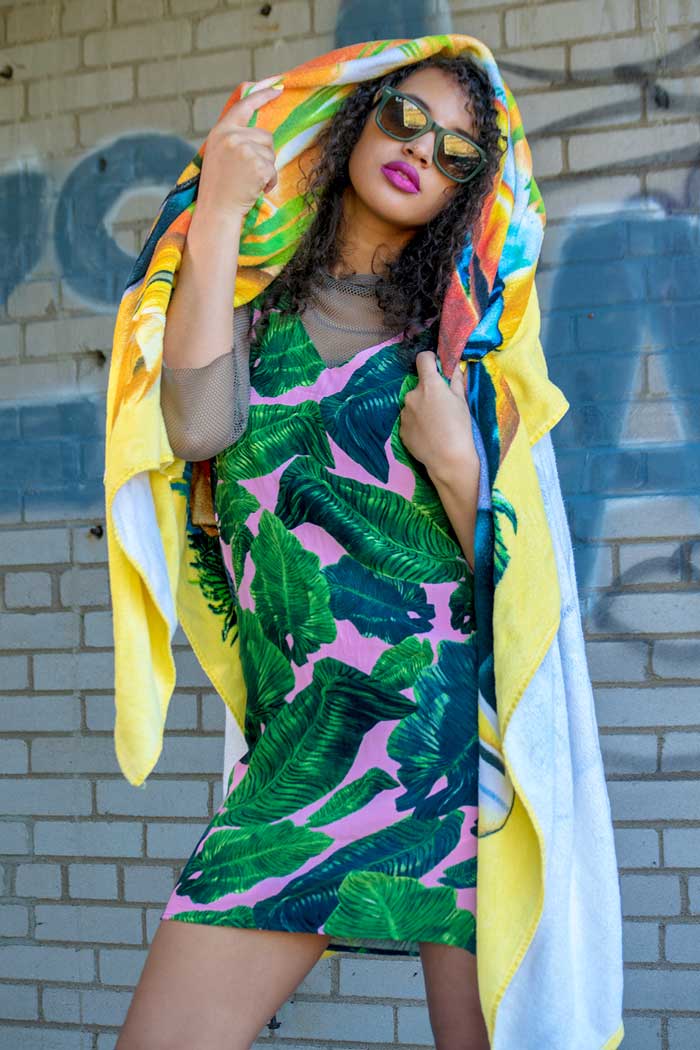 “Sleeping on Tar Beach was magical. Laying on the roof in the night with stars and skyscraper buildings all around me made me feel like I owned all that I could see. The bridge was my most prized possession.”

Imagine a warm spring night. You sit outside on a rooftop patio, a cool drink in hand.  The sounds of the city surround you: traffic, upbeat music from a nearby restaurant, the laughter of friends and family as you trade stories of both the far-fetched and the familiar. You are as much a part of this world of sound and sky, of love and laughter. It’s human. It’s connection.  It’s the feeling invoked by Tar Beach, our cover editorial this month. Inspired by African-American artist Faith Ringgold’s book of the same name, Tar Beach fashion embodies fun summer moments in an urban setting. The fashions are a contrast of urban with a beachy flair. It’s a paradox meant to remind us that urban doesn’t mean that you are trapped by your environment; or that those who live in urban settings have less joy, or less freedom than those do not.

While Tar Beach is a children’s book, the story message is translatable and inspirational to any age – To believe you can fly is to believe that the world is yours. This is something that the story’s main character, 8-year-old Cassie Lightfoot, already knows as she takes readers on her fantastical journey through the night sky of 1939 Harlem. While the story hints at deeper racial and economic tensions, the bright colors of Ringgold’s artistic style, the joyful exuberance of an 8-year-old protagonist, and the setting of New York, the jewel of American dreams, all come together to create a lighthearted take on these deeper themes. Perhaps this is why the book, Ringgold’s first, won over 20 awards and accolades including the Ezra Jack Keats New Writer Award, New York Times Best Illustrated Book, and Caldecott Honor Book, to name a few.

In Search of Freedom: Faith Ringgold

Born October 8, 1930 in Harlem, Ringgold’s Tar Beach is partly autobiographical and represents the cumulation of a long career as a political activist, as well as her changing perspectives on the opportunities available for African-American women (Penguin Random House). Most well known for her story quilts, Tar Beach Part 1 and Part 2 served as the inspiration for the children’s book. Given the lighthearted nature of the book, it may be a surprise to learn that Ringgold started out as an artist painting political and often angry works that spoke to the problems facing African Americans and women in the turbulent 1960s (Spector). Ringgold was politically active herself, supporting civil rights, protesting the exclusion of black female artists from museums, and even starting a group for African American female artists in 1971 (Guggenheim). On a trip to Amsterdam in 1972, Ringgold was exposed to Tibetan thangka (pronounced ton-kah) paintings by a museum security guard (Farrington). While Ringgold had grown up playing with scraps of fabric her mother gave her to keep her occupied, she hadn’t yet used fabric in her art (Farrington). As Ringgold matured as an artist, she began to use fabrics and textiles in her work. She first created the Feminist Series and the Slave Rape Series, in a style similar to what she saw in Amsterdam— unstretched canvas paintings, mounted on fabric (Farrington). These works represented a transitional period from Ringgold’s earlier works in the 1960’s, which consisted of large scale stretched canvases. Her more recent story quilts were created on unstretched canvas, quilted and framed with fabric (Farrington).

What is interesting about Tar Beach is its commercial success, especially compared to Ringgold’s earlier works. While the overall message and perspective didn’t change between the 60’s and 80’s (when Tar Beach was created), Ringgold’s method of expression did. As Nancy Spector says of Ringgold’s work, “Her paintings from this period [60’s] are overtly political, and present an angry, critical reappraisal of the American dream glimpsed through the filter of race and gender relations. Ringgold’s more recent aesthetic strategy, however, is not one of political agitation or blatant visual provocation. Instead, she has come to embrace the potential for social change by undermining racial and gender stereotypes through impassioned and optimistic presentations of black female heroines.” Ringgold’s use of story quilts, which is steeped in American and African American traditions, makes her message more widely accessible and uplifting rather than harsh and alienating.

Ultimately, Cassie Lightfoot’s view from Tar Beach gives us a glimpse of 1930’s Harlem, but also reminds us that our world is full of possibilities. After all, as Cassie says, “anyone can fly. All you need is somewhere to go that you can’t get to any other way.”

About Our Tar Beach fashion

The Tar Beach fashion presented in this lookbook is purely a result of a desire to pay homage to an author whose works I have admired from childhood. I actually had a signed copy of Tar Beach, which was, unfortunately, destroyed by mold from flowers that I had pressed into the book (I only did it with books I liked, 5-year-old logic). Either way, it was a book that I looked at frequently, even without reading the words, the pictures captured my attention with bright colors and graphic images. The idea of using Tar Beach as an inspiration for fashion came about during a photo session on a rooftop parking garage. This is like Tar Beach, I thought. From that point on, I knew that I wanted to create an editorial inspired by the book.

The editorial features resort wear fashion that would fit in with urban sensibilities. We wanted to remain faithful to the city while also evoking a feeling of summer and beach escape. For fashion and the culture at large, the idea of a beachy summer vacation is a narrow one. Yet, staycations are becoming an increasingly popular option for those who are too busy, or simply can’t afford to get away from the city for a beach vacation.

To achieve this juxtaposition of urban and beach, we’ve included several Summer 2019 microtrends including utilitarian, 70’s, and, of course, the ubiquitous bucket hat. Colors for Spring/Summer 2019 are more monochromatic and even somber than in previous summer offerings, so rather than bright and colorful fashion as featured in Tar Beach, our colors are more sedate, but they do fit well into an urban setting.