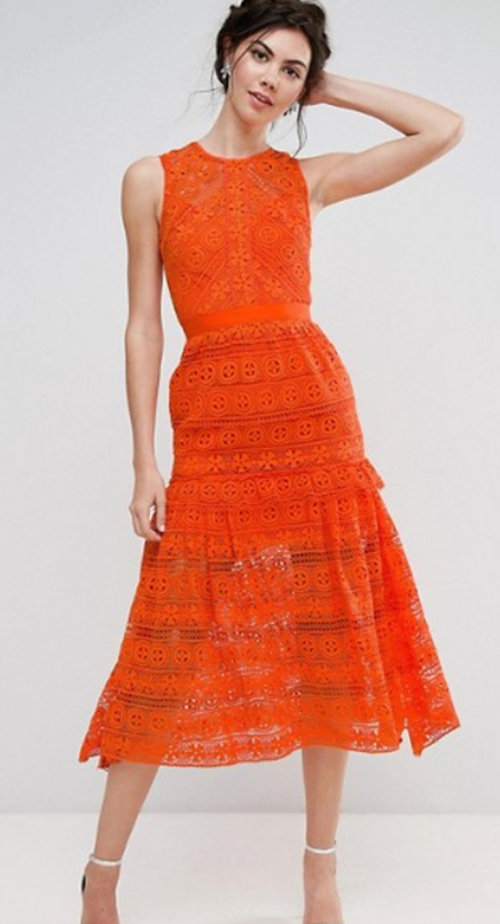 The rules for wedding attire are numerous: don’t wear white; don’t wear black; look nice, but not too nice; wear this style for a spring wedding; wear that style for a fall wedding. . .  By the time you’ve finished studying wedding attire etiquette, dressing for a wedding can feel beyond complicated. Worse still, even with all of the advice available to us for what to wear, much of it seems so last century, written for a 1950’s homogeneous audience of the Gidget variety. Weddings have evolved. There are destination weddings, adventure weddings, themed weddings. This is the 21st Century. Where is the Wedding Guest Fashion Guide for the 21st Century Girl?  You’ve found it. While this guide doesn’t cover destination, or adventure wedding attire, I’ve put together some fashion choices for the rest of us; you know, the ones who will be attending a co-worker’s wedding to that guy that kept hitting on you (black just might be the most appropriate color in this instance).

Your Bestie from High School

. . . IS GETTING MARRIED! AND You’re Still Trying to Figure Out Your Life. Hey, there’s nothing wrong with exploring life options. Amiright? Yeah. Besides, as previously mentioned, it’s the 21st Century. If there’s one thing that’s true about the 21st Century, marriage is not a foregone conclusion for everyone, nor is it obligatory. In fact, these days, we’re  often told that marriage is nothing more than a constraint on our autonomy and choices. So push aside any feelings of jealousy (What? Jealousy?!)  Embrace your freedom from patriarchy. It’s time to celebrate your bestie-for-life’s new beginning. Your friend’s wedding isn’t about you, or your life journey. You are on your own path. Don’t measure yourself by someone else, it’s a disservice to you, and to the person whose life you’re assessing. So celebrate with a full heart, and if you really need a mind-shift, schedule a finding-yourself-trip to Tibet for after the wedding. As for what to wear, if it’s not a bridesmaid’s dress, wear attire to show that there’s no reason to be ashamed of going off script to explore your own path. Look for a dress that embraces your individual life journey with a deconstructed or free flowing silhouette.

. . . SINCE SHE LEFT YOU AND YOUR DAD. Okaaay. A third wedding? Really, mom? A third wedding is a tricky thing, so you have to look at the quality of your relationship with your mom to determine the message that you want to send with your attire. Are you happy with Mom? Has she finally escaped your crazy dad, rebound husband #2, and found a true prince? Or, is she in love with con artist #2? Finally, option three: is she just in an eternal search for a love that’s never going to fulfill her because she gets bored easily? If Momma is bold enough to host a third wedding, forget low-key. Choose one of a bold option, depending on your personal feelings about the situation. Bold Option One: She found a true prince and you’re thrilled? Go with bold classy. Option Two: Your mom found another con artist. The only good man she ever loved was your dad. Might as well get a bold party dress that you can just reuse for the next time she gets married. Why buy a new dress each time? Option Three. You’ve finally come to realize that mom is just a free spirit. It is what it is. You just need a bold whatever, Mom dress. Whatever works. Whatever you want to believe about this third marriage, mom. Whatever, whatever.

. . . TO A FIANCÉ WHO KEPT TRYING TO HIT ON YOU at the last office party. You like your co-worker, but you don’t like her fiancé because of that one time he tried to corner you in the hallway on your way to the bathroom. And now you’re going to have to congratulate the happy couple at their wedding?! Awkward. But, you can’t miss the wedding, it would cause even more awkwardness. So, what do you wear when you know the event is nothing but awkward?  Unless you want to start a major drama à la Jerry Springer, modesty is the order of the day.

. . . YOU LOVE TO HATE EACH OTHER, but a wedding is a happy occasion. She invited you – to gloat, of course, but you accepted. When it’s time to make make a toast, you’ll tell her, tell everyone, just how much you love her. You’ll also tell her that you forgive her for all the mean little things she’s done. Frenemies support each other, and that’s why you’re there. Your attire is about looking nice (better than that cow). So celebrate your frenemy’s marriage to your ex-husband; after all, the divorce just became final two weeks ago, and she can have him.

. . .It doesn’t matter that your crush doesn’t even know your name, or that you’ve crashed his wedding. Crashed, what a strong word. All you’ve really done was come to his wedding to save him from future misery. When you stop the wedding, when he sees you, and sees how much you love him, he’ll realize what you’ve done was done for him. He’ll understand that he’s marrying the wrong woman. It’s you he loves. The two of you are meant to be. They say you should never outshine the bride, but you can’t help but to outshine her. You are the light in the darkness of your true love’s life. Your fashion should make it crazy easy for him to walk, no, to run. He will run from the other girl, run straight into your waiting arms.

. . . TO A GIRL WHO’S YOUNGER than you. Heck, you’re not even sure she’s legal. What she doesn’t know is that the prenup she signed is something you drafted yourself, because daddy always lets you draft the prenups. In fact, you’re looking forward to having a super close relationship with your new Mommy.  You’re almost certain that she will get your sense of humor, unlike dad’s other five wives. Those queen bees all blamed you for the breakdown in their marriages. As if. This latest wedding of Daddy’s will be a wedding to remember. You’ve gotten the best wedding gifts for the couple: for her, a case of Pampers; for Daddy, a $20,000 bottle of Domaine de la Romanee-Conti.  You’ve also prepared a bill for your new Mum’s portion of the wedding, along with the information that you will have to limit her budget, as you handle Daddy’s finances, and she’s been getting a bit too spendy with the credit card Daddy gave her. More than likely, she’ll have to get a job. Won’t that be fun? And so should your attire be. You’ve gone to all the fittings with your new Mum, and have secretly, as a fun surprise, had a matching dress made for the reception. When people wonder where the bride is, you can loudly point her out, and say you’re thrilled they got confused, as the bride is three years younger than you. And, of course you’re not worried that she’s a gold-digger, not worried at all. Oh, and, won’t she just love it when everyone tells those enfant terrible jokes you’ve written out as toasts. Daddy is getting married.  Let the fun begin!

. . . You weren’t invited. She always felt that your mother and you were nothing but classless trash. You haven’t talked in years, but you read on Facebook that your stepsister snagged a wealthy trial lawyer. Normally, you wouldn’t have crashed a wedding, but she broke your Justin Bieber CD back in 2008. Besides, there will be free food and drinks. She may not have invited you to the nuptials, but why miss out on the chance to rub elbows with all those fancy schmancy up-and-comers? And, surely there will be a few single guys at the wedding. Maybe you can catch your own up-and-comer. Your stepsister, social climber that she is, owes you that much. What to wear? The goal is to look nicely put together so that she doesn’t kick you out before you can make a few key connections. And by the way, you’re not a social climber, your stepsister is. You’re a networker. There’s a difference.

Uncle Timothy is not Greek, but he wants a big wedding to the man of his dreams. This isn’t a staid, sedate wedding. Uncle Timothy wants to go stereotypical with rainbow everything, including his suit. You’ve heard that the cake will be a five-tier monstrosity and that Whatever Lola Wants from the Drag Show downtown will be performing at the reception. Most of the rest of the family, the ones from the midwest branch, won’t be there, but you will be. Yep. You’ll be right there next to the five-tier grooms’ cake. Mazel Tov, Uncle Timothy. Maz-el-Tov!

. . . Super-Goth Wedding. Your horrified parents tried to steer her toward a pastel goth wedding, at least it’s more traditional, but your sister bleeds black. For your baby sis, the wedding theme is Super Goth, or nothing. Actually, there was a short period of time that she considered a Tokyo Ghoul theme but, thank god, your mother got her to pull back from that. You’ve looked through all the wedding guides, and they all say never wear black to a wedding. It’s considered bad luck. Well, not to your sister. She’s wearing rich black, which is different from true black, and a shade lighter than back-to-black. So, yeah. The thing is, she has instructed all of her guests to wear either black or red. You’re not goth, not by a long shot, but you need  a goth-like uniform, preferably one you can use for non-goth related events. Don’t worry, we’ve goth you covered. Hahaha, a little goth humor there. Too gothic?

. . . WHO’S ALREADY COUNTING DOWN THE DAYS until the end of the prenup requirement. You love your friend. You’ve been close since kindergarten. You hate that she’s only marrying him for the money, but people make dumb choices sometimes. While you can’t support her money motive, you can be at the wedding as her friend — her glammed up, single friend, who will be happy to console any broken-hearted billionaires, because that’s just how kind and considerate you are.

. . .  One by one, all of your friends have gotten married. Now, you’re the only one left. In fact, you’re so single, you don’t even have a boyfriend. Your married friends are always trying to fix you up with different guys, but the guy pool is getting pretty thin (of hair). You never wanted to be a cat lady, but the thing about cats is that they’re chill. They don’t expect your world to revolve around them. They’ve got their own thing going on. Cats are quiet. They’re independent. You never have to worry about the toilet seat. Cats are cool. So, bring on the cats, and don’t let the fact that you’ve become a cat lady get you down. Let your attire make a statement by saying you’re happy to be single; or bring in the good vibes by dousing yourself in flowers, maybe that will make it easier to catch the bouquet.

Hope you’ve enjoyed this 21st Century Wedding Guest Fashion Guide. Please note that this is not a sponsored post, nor are we affiliates to any of these vendors. We’re offering this publication for the enjoyment of our readers. Have a great wedding season.