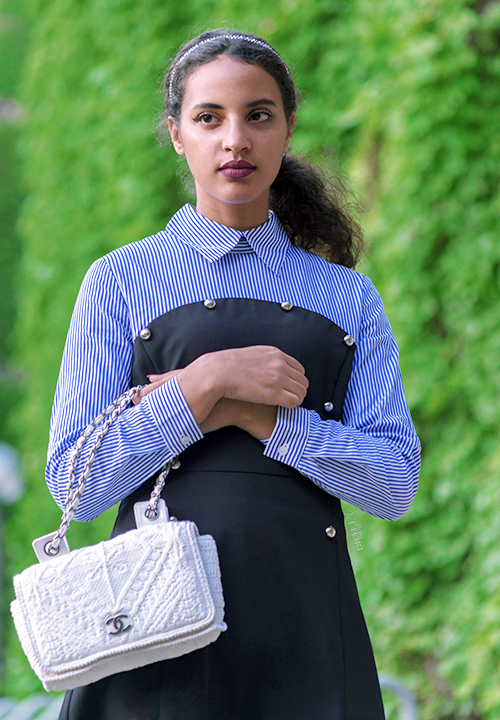 Slay The Books Looks Back to School Fashion 2017 Look 4

Slay The Books Looks Back to School Fashion 2017 Look 4

Hope everyone had a good weekend. Today’s Slay The Books Looks Back to School Fashion 2017 Look 4 archetype is the popular girl.

This series has used common school archetypes to discuss identity, which, as we talked about in Back to School Look 3 (tech nerd), is something that is always a work in progress. Whether you’re in high school, or grad school (like me), or happily done with school, it’s undeniable that school experiences play a role in our formative years, partially shaping us into the people we are today. With that being said, INTJs rarely identify with the “popular girl” archetype. I’m not saying INTJs aren’t popular, or can’t be popular, but being popular isn’t a goal for INTJs. Instead of an identity like popular girl, or squad member, INTJs seek intellectual or intuitive belonging, something that can be hard to find in a setting where individuality is often subsumed by the more easily standardized archetypal identity.  Most INTJs have felt this need as a kind of deep rejection of who they are, when their peers reject their individuality in favor of archetypes as a baseline for identity norms. This discomfort with embracing archetypal identity jolts INTJs out of previously assumed identities and makes them feel “other” or outside the main group. If, as with other group established norms, there is any one identifying factor that unifies INTJs, it is a sense of being other.  For many INTJs, the sense of otherness is something they will carry with them all of their lives, whether they find an intellectual or intuitive home, or not. While being other is a painful experience, it also serves as an unconscious strength as well. Being “uchi -soto”, outside of the group while also part of a group is one of the factors that enables INTJs to develop systems thinking skills. In this way, INTJ identity is a paradox, that is rejection of identity acts to also strengthen the identity or way of thinking.

Rejection hurts, but it also keeps INTJs from buying into mainstream group think. As much as INTJs, and introverts alike, may be prone to saying they don’t like to people, humans are social creatures. INTJs need human connections. Going it alone in school, or in life, takes a toll. For this reason, INTJs may develop a mask persona, an identity that is an acceptable norm within the environment. This self-preservation tactic keeps INTJs in the system enough to be observers, yet the INTJ understands that they do not necessarily embrace the norm, after all, a social outcast cannot enforce changes to a system without being a part of that system. That’s not to say that the INTJ’s goal it to make changes to every system to which they belong; for many young INTJs, the goal is to simply survive without a target on their backs until they can move onto better things. The reality is that most systems abhor complexity, and individuality makes for a more complex system. For INTJs to survive in places like junior high and high school, it’s important to instill a strong sense of values and self before simplistic group norms strip young INTJs of their feelings of self-worth.  It’s hard enough to be a female, but for female INTJs, it is even more important that they are raised with acceptance for their unique cognition style as the identity of the rational female is still one that can face challenges in global culture. Ultimately, INTJ females are equal parts mysterious and intimidating, a combination that draws both savior and explorer types to them.  If an INTJ is lucky, they may find their place among like-minded people and may find themselves quite popular, without even trying.

Our popular girl dresses the part, but she’s working the system. She shops the trends, but keeps it on the edge of mainstream with a studded seersucker and navy dress. She flashes designer in small quantities, and wears her confidence proudly.

2017 back to school INTJ INTJ female