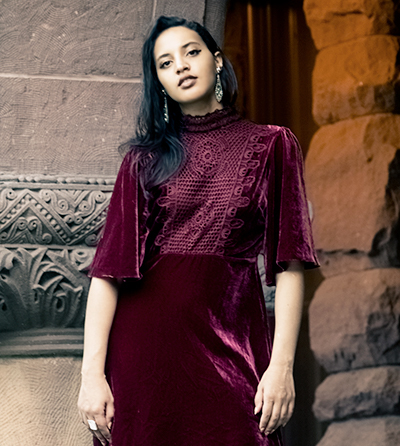 This holiday season, we’re keeping it minimal by focusing our holly jolly fashion styles on holiday colors. Monday, we were all blue for Christmas (Remember that old Elvis song, Blue Christmas? Yeah. Like that). Today’s minimalist INTJ holiday look is all about the iconic Christmas red.

Have you ever wondered why we gravitate to red during the holidays? The association of red and green as part of holiday symbolism comes from the traditional use of holly by Romans when celebrating the winter solstice. When Christians adopted the holiday, red became connected with the blood of Christ. Red wasn’t strongly associated with Christmas though, until Coca Cola depicted Santa in red. Before that time, Santa often wore blue and other colors. So, Coca Cola’s marketing move was pretty savvy; after all, bright red evokes a feeling a liveliness amidst the dull colors of winter, when having something fresh and alive is so needed. Besides the natural element and associations red has with the holiday season, wearing red can also help you look more attractive during the holidays.

By now, it’s fairly common knowledge that women who wear red are seen are more attractive. Color psychology says that red is an attention grabber, and gets the heart racing. It is associated with love and adrenaline. Choosing to wear red is one way women try to boost attractiveness to the opposite gender. So wearing red won’t just make you look holly jolly this Christmas season, it might just help you catch that hottie wall flower that you’ve been analyzing over the past two years at the workplace Christmas party.

So, have a holly jolly Christmas, it is a great time of the year.