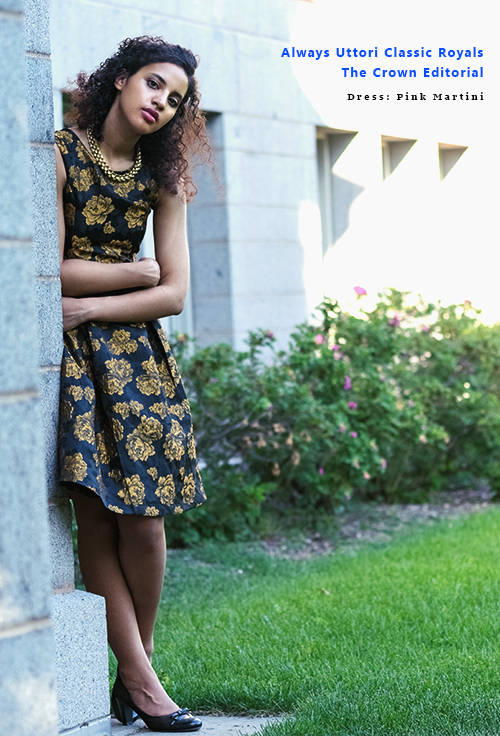 It’s Monday, and we’re back with our 2nd week of editorial fashion inspired by the Netflix Original series, The Crown. Today’s look leaves modern styling behind and returns to a more historical perspective – early 1950’s style. During this period in her life, Elizabeth comes into her own when her father passes away, and she is crowned Queen Elizabeth II of England. It was the first coronation to be televised internationally. It is also during this period that her second child Anne was born.

The many responsibilities of her roles as a wife, mother, and monarch during this time, meant that Queen Elizabeth had to be many things to many people. Her style during this period reflects those requirements, as it had to be at least one of three things: classic, ornamental, or practical. This particular dress is all three. It has a flared silhouette, and is paired with sensible, block heel shoes. In fact, while the floral print is in an ostentatious gold, the print is actually befitting The Queen, as Queen Elizabeth is known for wearing floral prints, though she tends to choose bold and bright colors over INTJ black (see more royal fashion here). Even though the look reflects Queen Elizabeth’s style, we’ve named the look, Oh, Margaret! In honor of the queen’s younger sister Margaret, who was quite the style icon during her life. This dress looks very much like something Margaret would have worn.

For The Queen, florals not only make a non-offensive, yet bold print, they also allow her to stand out from the crowd and be seen from afar, which is important for a public figure addressing millions. Florals also have historic significance in The Queen’s life as floral and chintz patterns became popular in the post WWII era, when Queen Elizabeth was still a young monarch.  Post war fashion emphasized femininity through both silhouette and print, an answer, perhaps, to the more masculine 1940’s era.

As for the history of the floral print, such prints had long been a part of Asian fashion, where the meaning of the flower used was embedded into the meaning of the fabric depicting the print. For example, in Japan, the chrysanthemum became synonymous with the sun, and therefore royalty, as the royal family were descendants of the sun god. In China, peonies and phoenixes were commonly used to denote wealth and status. India truly brought the floral fabric to popularity in the west with their use of intricate chintz patterns. These floral fabrics spread from Asia, through merchant trading, to become traditional style standards in Britain, and western culture.

Note: Journalistically, British publications refer to Queen Elizabeth as “The Queen,” capitalizing it as a title. We have followed this stylistic practice, though American grammar instructs to do otherwise. Grammar isn’t our favorite topic around here, but we do try.